Do not miss this opportunity to learn and dance SAMBA @ Arteluta with ANINHA MALANDRO: Samba Master Dancer, Choreographer and Educator. One of the most influential women in the Brazilian dances and arts in the U.S and Brasil!

We will be hosting Monthly Pop-Up Samba Encounters with Aninha at Arteluta Capoeira Academy in Lomita.
One Saturday per month.

THIS CLASS IS CURRENTLY ON HOLD

These classes are for all levels. Come laugh, sweat and dance! 💃

Ana provides a space for people to develop their knowledge of the Brazilian culture as well as reconnect with their body, mind, and soul.

Her Samba classes for all levels cover the basic, intermediate, and advanced steps of samba, variations, breaks, transitions, and different samba rhythms and styles. She teaches the traditional as well as the contemporary forms of Samba. Some of her specialties include Jongo, Samba de Roda and Malandro style.

❤️ More about Aninha Malandro:
Ana Carla Laidley was born and raised and Rio de Janeiro, Brazil where she grew up in the cradle of Samba: Estação Primeira de Mangueira, where her father is a very well-known respected musician and her mother an excellent and one of the first “passistas” samba dancers.

She has taught in Australia, Japan, Mexico, Canada, Brazil, Hawaii, and all over the USA for over 25 years.

She is the founder of the groups Samba N’Motion and Malandro N’ Motion and has choreographed several numbers that reflect her understanding and passion for the Samba de Malandro and her respect to the varieties of style and movements of this unique form of dance: SAMBA!

Ana is also the co-founder of the International Samba Congress, the biggest celebration of samba outside of Brazil. It’s a unique three-day cultural experience revolving around a strong, exciting, energy-filled rhythm which is called Samba. More info: www.internationalsambacongress.com/

ArteLuta Capoeira Academy
5.0
Based on 6 Reviews

Lethicia L.
2017-10-16 13:40:37
This capoeira group it is really nice.Varal is an amazing capoeirista, his classes are great!Monica is great and they run a great program hereThe offer... read more 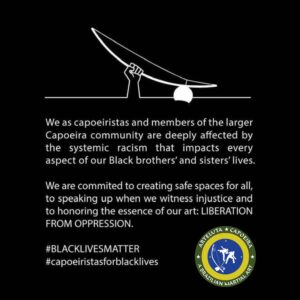